On Friday 9th October 2009 Special Forces of the Republic launched a covert mission into the heart of the Empire. The location: Newcastle Metro Radio Arena. The target: Disney on Ice: Princess Wishes. The Mission Report follows: 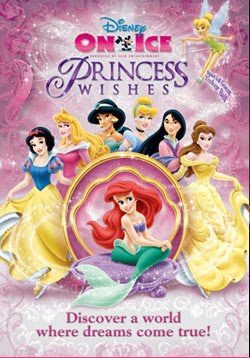 The incursion into enemy territory was due to commence at 16:30 hours. A full hour in advance the team checked their kit and piled into the APC*. The soldier who was to carry out the most dangerous part of the mission, Private Hannah, was in full camouflage. Admittedly their was more gold and pink in the camo pattern than usual but it was ideal for the mission. Although the lowest ranked in the team it was obvious Pvt. Hannah was really in charge of the mission.

As we approached the enemy fortress the extent of their forces stunned us. There were reinforcement Princesses pouring in from every direction. Snow White’s, Aurora’s, Cinderella’s. More types than we knew existed. Even rare Ariel’s covering the water approaches making a seaborne assault impossible. Keeping our heads down we pushed our way through with Pvt. Hannah observing the enemy closely and even approaching some to gain intelligence.

The Intelligence Experts at Republican High Command had provided IDs to get us through security and this worked fine, but nothing could compare to the shock once we entered the inner defenses…. Merchandise Squads…everywhere… If you could stick an Imperial logo and a random Princess on something it was there. And the new troops arriving soaked it all up. Their brainwashing had begun and it was hard to resist. Although Pvt. Hannah made a show of interest to distract the guards we knew (hoped) she had the strength to resist. If not, then our backup weapons (the Virtual Incursion Support Arms – VISA for short) might not have the resources to get us out alive!

When we finally entered the inner Citadel, the Empires true strength was turned against us. Combat teams of Prince/Princess skate troops poured out in turn, spewing love, friendship, smiles and song in an almost irresistible torrent. I could see Pvt. Hannah fighting the assault, as did we all, but it seemed she was weakening. The smiles seemed too real. The targeting of key enemy personal was with glee rather than napalm.

And then the combat got to close quarters. We tried to resist but when the knives (and spoons and forks) came out we beat a hasty retreat.

Our secret agent within the Empire, the great Witch, Maleficent, despite launching the great Dragon Attack, was defeated by the Sword of Truth.

Our assault was in tatters. Pvt. Hannah appeared shell shocked, as evidenced by the huge grins on her face. But nothing could prepare us for the final assault of the Imperial Cinderella Death Ball! The massed ranks of dance troops glided effortlessly across the ice and our assault was finally over.

The Empire had won…again. Although we managed to escape via an open flank without facing the Merchandise Squads again, we barely made it back to the APC. Guerrilla Merchandise teams stalked us as we left, not true troops of the Empire but fighting with cheap copies of the Merchandise Squads Weapons of Destruction. But the state of Pvt Hannah was shocking. She had been turned and spoke nothing but good of the Empire. Nothing we could say could change her mind. Another soldier was lost. But I had my suspicions she had been turned all along and was really a double agent, infatuated with the Empire’s doctrines and trying to lure more troops to the Empire in suicide missions like ours.

And on a lighter note? It was actually really well done. The skaters were excellent, the production spot on. Despite all the merchandising and schmaltz it really hit the mark for the target audience. And some of those were a bit scary. The girls who are a few years older than the majority who take the Princess look VERY seriously with immaculate dresses and makeup. Very, very scary 🙂

And the highlights for me? Well at one point Jasmine’s trousers started to come down and she had to keep skating off ice for ‘repairs’. And the overall show was hosted by Tinkerbell (despite regular appearances by Micky, Minnie and Goofy) and all I can say is that she’s put on a bit of weight since the last film!

Worth a look if you’re that way inclined. I’ve a feeling this may be an annual mission so Private Hannah and her dad will march again!