Yesterday was the last meeting of the Tyneside Wargames Club of this year. And my FIRST game at the club this year! Not a good score really. Apart from the big Ayton game in May and a small game at the Pendraken Birthday bash, this is the only gaming I’ve managed this year. I’ve got a reasonable amount of painting done but the lack of gaming has been a little frustrating. But enough whining!

As this was to be a big event for me I wanted to make it a decent game and it made sense to bring out the 28mm ImagiNation forces again. As two other Ayton participants live locally  – Phil (Norman D Landings) and Ken (Marshallney) I thought a small game to follow on from the game in May would be nice. To keep within the framework of game milieu meant that myself and Ken were on the same side and Phil’s forces the enemy. As that meant a rather uneven bias in the forces I tried to pick a scenario that worked around that. Reading through Charles S Grant’s The Wargame Companion I saw details of a small Teaser call Wagon Train. I thought this had possibilities as I had a decent set of wagons and guns and limbers in my forces. I then had a look through the Battlegames Magazine Table Top Teaser compendium and found a variation on the same Teaser and decided to use this as the basis of the game.

If you want to see how the game went before reading some of the details and comments below you can find an eyewitness account from the ever reliable Private Lamm in his Journal entry. And an annotated galley: Byzarbian Interlude. I’ll apologise in advance for the odd shot with tape measures and dice in but given the amount of vodka I’d drunk throughout the game I was lucky I could hold the camera steady!

The defenders were to be the forces of Altefritzenburg defending the wagon train and Wheyeydia coming to the rescue. The forces of the Sultan Pasha are normally allies of Altefritzenburg but for this game a thought a little treachery on their part might even the odds. Phil’s forces, though small, was quite tough with the camel gunners providing good firepower and the lancers a good strike force. The plan was that they would be the starting force. On predetermined turns they would have two forces arriving to support them. These were to be the forces of the Pasha Sultan! The Sultan has always had dealings with pirates (he counts some his friends and allies) and it seems those about to be put to siege in the town are old friends and he feels obliged to turn against his new allies and return to his old ways. The forces of Wheyeydia do not know this. When they arrived on table I moved them as supposed my own troops but at the orders of Phil. At the point they would declare their intentions (i.,e. fire on or attack their allies) they would then move over to Phil’s control. 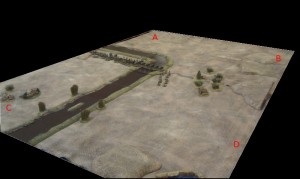 The forces of Wheyeydia again had a predetermined arrival order by choosing an envelope at random which listed each unit and the turn they arrived at point D. Luckily Ken chose the envelope which saw his forces arrive from turn five onwards.The main attack force arrived on turn one at point A. The forces of the Pasha began to arrive on turn three at point B with the cavalry arriving on turn six at point C.

The version of the Teaser in the magazine had the wagon train moving at 4″ a turn. In retrospect this turned out to be too slow as once Phil’s lancers drove off the Uhlans they descended on the wagons and stopped the main force getting across. The table was also slightly smaller than the 9’x 6′ of the original and I think this meant that Phil’s troops got in sooner than planned. We also game him the first move which also helped.

The arrival of Ken’s troops was not helped by failing his first 2-3 command rolls which reduced his movement to 100mm a turn. And we also forgot that troops in column away from the enemy could make double march moves! This meant that although Ken’s troops effectively drove off the enemy it was by their impending presence rather than through combat! I must apologise to Ken as yet again his fine troops struggled to come to grips with the enemy through no fault of his own.

The rules we used were the same as at Ayton and are from Henry Hyde’s forthcoming The Wargaming Compendium. As none of us had played the rules since May I’m sure we missed a few things (like the March Moves!) and I’ll hopefully be giving Henry some feedback in due course. Overall they played well though.

It was nice to get the troops out again and there was a fine selection on display. Ken’s forces were a mix of Old Glory, Jackdaw and Wargames Factory.

While Phil’s were a fine selection of Old Glory for his (N)Ottomans and I think Foundry for the Pirates?

My own were predominantly RSM with a few Eureka for the Turkish pirates and the Sultan Pasha himself.

And the fine desert scenery was supplied by Lawrence. If you browse Richard’s (Herkybird on TMP) blog you will see many examples from Lawrence’s collection and having decent terrain really helped make the game look good.

And as it was the last Club meet of the year there was copious alcohol to be had so many thanks to all the chaps at the Club for making my first game of the year a memorable one!

6 thoughts on “A Festive Byzarbian Interlude!”