And so we come to Day 2. Saturday night in Newark was most enjoyable. A few beers (including one VERY expensive one – sorry Simon!) and an excellent Kerelan meal at Koinonia. We were all staying at the Compton House B&B. This was a lovely old house and they kindly sorted suitable vegan options for breakfast. I’d chosen the cheapest room in the house, Harry’s Room, and all I can say is Harry must have been bloody small! The shower cubicle in particular was a little snug for someone  6’4″! But all in all, a nice stay.

To the game. Simon has a new game room. Half the garage converted to allow for up to an 8’x6′ table, painting space and storage for books and figures and terrain. It’s an excellent space. The game was to be Sharp Practice, which I’ve wanted to try for a long time, and Simon had worked a scenario following on from last year’s Ayton game where our C18th ImagiNation forces were heading for the coast to extricate themselves from the defeat at Pescadrix. The advance troops of The Gateway (Iain) and Altefritzenburg (me) were to secure the bridges over the river and clear the path for the army to get to the coast. The evil and decadent forces of Medetia were there to stop them! 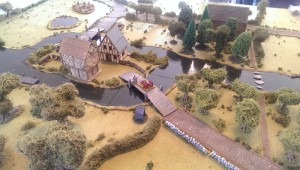 A lone sentry stood with the gun on the bridge as the day dawned. 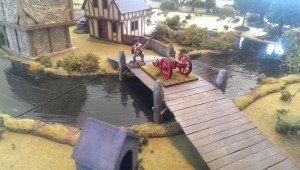 The morning chorus interrupted by the sound of cavalry approaching down the road, and then the whooping and war cries and the Native Indians of von Donovan’s Legion erupted from woods behind and rushed to the southern bridge. Now alert, the sentry rushed to the nearest house to sound the alarm! The Indians rushed to the bridge, now joined by the Corsairs of the Purple Sash who had emerged from the nearby marshland. The race was on! 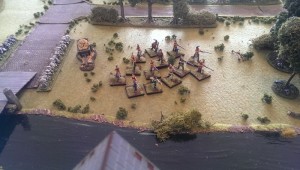 The alarm raised, elite Grenzers rush to the defence 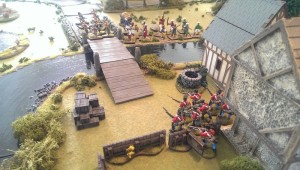 Meanwhile, Gateway dragoons charge onto the bridge and tip the undefended gun into the river 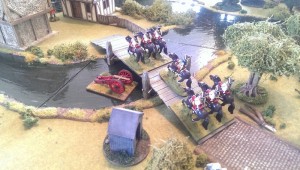 The dragoons were to spend quite sometime crossing the bridge. Deciding to dismount. Then mount again and then finally dismount as, with Gateway infantry massing behind them they decided it was a dragoons job to assault the nearby house! 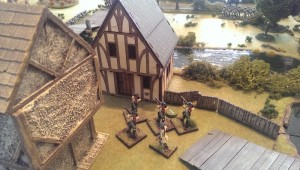 They were to be kicked back out by the few terrified gunners hiding there and it took them a looong time to finally capture the building, where they spent the rest of the action occasionally taking potshots but mostly trying to tie up their prisoners!

The Indians finally rushed the bridge while the Corsairs provided fire support but although coming to grips with the enemy they had lost too many men and were driven back in disarray! Meanwhile, the Corsairs were threatened by rapidly advancing Medetian infantry and after a bloody melee they too were driven from the field with heavy loss! 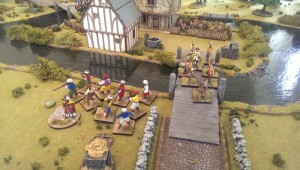 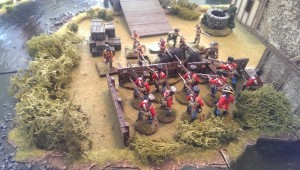 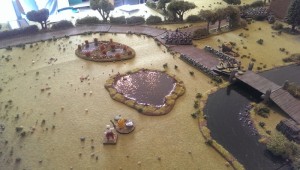 The southern bridge was lost and Medetian infantry advanced to secure it.

Meanwhile, at the other bridge, under the vigilant eye of Captain Mainwaring of the Gateway, an assault on the town began. Sort of. The Gateway advanced slowly and finally plucked up the courage to attack the Grenzers, only to be thrown back, leaving their apparently less then popular Captain lying wounded in the street. Meanwhile, the Gateway set up their gun ON the bridge to try and lend support to the rest of the attack. 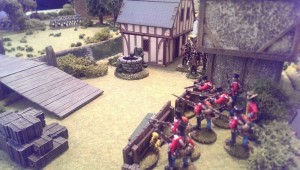 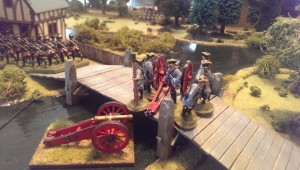 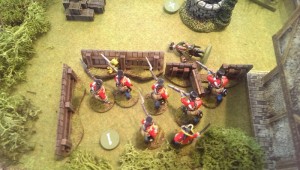 To the North, the troops of Altefritzenburg, in the form of von Donovan’s Savage Swans, tried to force a crossing of the river. But they were to find this very hard going as elite Jaegers brought chaos to their ranks and held them their for a long time. 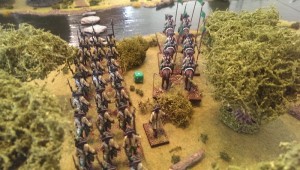 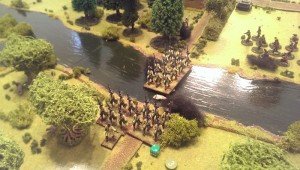 Their attempts were not helped by the Medetian rocket battery on the hill to the north. Although the first rocket salvo was to prove astoundingly inaccurate! 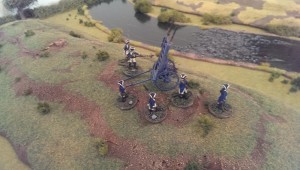 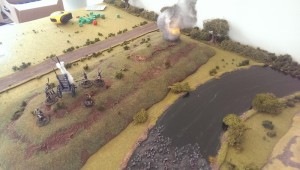 This inaccuracy was to still prove the bane of the Swans and several hits and near misses were to cause much disruption in the ranks and contribute greatly to most of the attack force being driven back to dress their ranks. 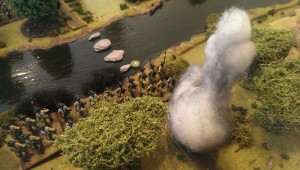 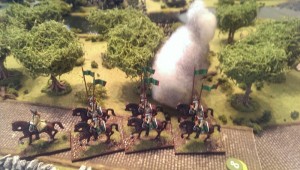 To the South more Medetian troop arrived by boat. The now reformed lancers charged through the woods to engage them only to be driven back in disarray! 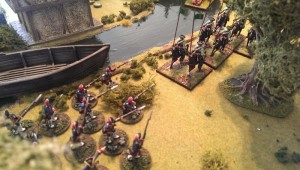 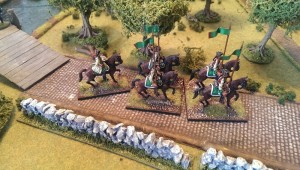 It was clear the attack was faltering. Although some of the Swans, under Leutnant Lamm (newly promoted) finally forced a crossing and drove off enemy infantry it was clear they would soon be cut off! 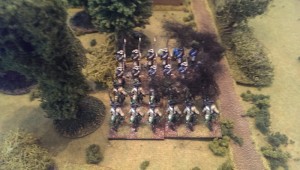 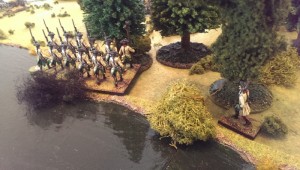 As the Gateway troops in the town came under more fire from front and side they had no choice but to retire. Although some Jaegers had arrived in support and local natives rushed from the hill to (hopefully) aid them, it was clear the day was lost. The route to the sea was closed and the army would need to find another route! 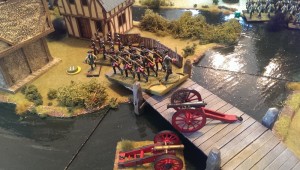 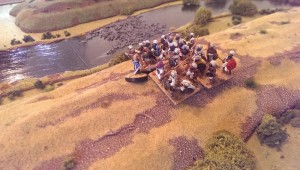 And that was it! A bloody great game! I really enjoyed the rules and look forward to trying them again. The card driven nature meant there were times when troops just stalled in indecision (although some of that was just Iain!) and then the action would pick up. The skirmisher types proved very effective (as appropriate for the scale of the game) and the action just ‘worked’. And they are great rules for ‘narrative’ type games where the story is a big part.

And Simon’s table was lovely (supplemented with trees and a few bits from Dave). Troops were supplied by all of us. It was a great days gaming and great company (as always). And there were numerous ‘events’ that will become legends in the retelling!

Needless to say there are a LOT more pictures in the main gallery: Sharp Practice 2015

Thanks must go to Simon and Dave for organising an excellent weekend. I haven’t had so much fun for ages! And to Iain for providing us with so many ‘moments’!