And so it continues…

After completing the paint rack I decided to finally base up some of the 1806 6mm French I’d had painted. I’ve had a few done by Phil over at Firezone which have been based up before and had another eight strips from him to do. I’m still waiting in another full unit from him – hopefully soon. I also had some from Michael at Angel Barracks and they were the main ones I wanted to get done as they had arrived last week. There is a unit due next week from Raise the Colours and then I shall do a proper little review of all three but in the mean time I thought I’d write up my basing in a bit more detail. Photos have suffered a little in the early shots from the camera playing up but it gives the general idea…

As mentioned before, my 1806 chaps are mainly for use with Lasalle but the basing system should allow them to be used for Grande Armee as well. I use 60x60mm bases with 2 40x20mm sections cut out the middle supplied by warbases.co.uk with a 1mm thick bases piece to fill the gap. Figures are based on the 40x20mm with 4 strips to a base for main stands and 4 figures for skirmish.

First step is to coat with PVA and then cover liberally with a mix of fine and medium model railway ballast.

This is then painted with a Hobby Craft Burn Umber. 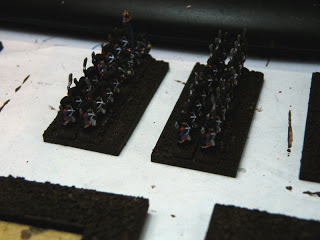 I  then dry brush with a lighter brown.

And then finish with an Antique White.

The flock is a mix of Baccus short flock, some Games Workshop Autumn Grass and occasional Silfor tufts and model railway ‘foliage’.

These are the Angel Barrack troops in their Lasalle incarnation.

And in their Grande Armee form.

And a few of the combined units for Lasalle.

It was nice to make some progress. I still have a couple of 1815 Prussian bases close to completion and if I get the 15mm Punic armies I’m chasing then I may detour to finish a couple of units for them.

Anyway, nice to have finally achieved something after a bit of a break…