Well, after a few grabbed sessions over the last few days I’ve finally finished (for now) my VonDon Corp. contingent for FUBAR. This gives me enough for a viable little game so all I need now is some opposition, of which more anon. On to the Swans in Space…

The contingent can still call on the heavy weapons if needed:

The Recon Team, with their Combat Walkers and prototype power armour: 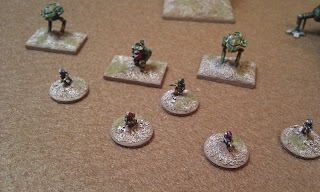 There are 4 teams, each with their own IFV. Yellow Team:

Blue Team are the rapid response team, either in their ARV (Airmobile Recon Vehicle):

Which enables team to deploy with support from the ARV HMG:

Or with their standard IFV:

Any of the Teams can be deployed further afield with the OSTV (Orbit-Surface Transport Vessel):

And yes, it is Starbug!

So there we are. Enought to be going on with. I have a small EarthGov monitoring team nearly done and have planned out the colonists and a rival corporation. And I have some Dark Realm Miniatures coming as well.

That will do for now…