Today I had my first game of the year, though it wasn’t quite what I had planned! My lad Zach has been pestering me for a while about how I play MY games and will I show him. So, as per the last post I acquired some plastic Germans and Soviets and we set up a game. So without further ado…

The Russian Offensive was rolling on relentlessly as the hard pushed Wehrmacht fought tenacious defensive actions again and again. But not everywhere… In one corner of a muddy foreign field, Oberstleutnant Zachmann led two squads and an attached Tiger tank in a counterattack to drive the evil Russian troops from their defensive position and drive a wedge, threatening their offensive and hopefully providing a small respite for his hard pressed comrades.

As the German troops advanced in the early morning light the Russian troops formed up behind a walled enclosure, a muddy field to their front, and a contingent hastened to the woods on their left intent on threatening the flank of the advancing Germans.

The Germans began their advance, opening fire as they walked and their superior marksmanship starting to tell even at long range 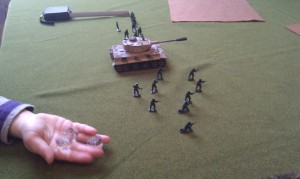 The withering fire from the Germans prevented the rush to the woods and sensing victory Zachmann pushed forward relentlessly!

As they approached the muddy field, knowing that entering it would slow their advance, the German fire stepped up a level as the Tiger began to blast the Russian defenders behind the wall.

And soon the Russian defenders crumbled as more and more fell…

Sensing victory and oblivious to the few casualties his men had suffered, Zachmann pushed on to victory!

The few remaining Russians made a last stand in one corner of the enclosure.

Before finally succumbing as the last defender died and the Germans slowed their advance in the mud, but now with little concern as there was no enemy fire to bother them.

Zachmann’s offensive had paid off with a total victory and annihilation of the Russian defenders! Surely that Iron Cross was now his!

Basically, I got diced! I had given the Germans the Tiger to try and balance the Russian cover but was concerned that advancing over open ground would prove costly for the Germans. In the end Zach just rolled a LOT of sizes! I tried to keep it simple. Alternate move and fire. Roll 5,6 to hit in open, 6 in cover. The Tiger rolled four dice per shot, 4,5,6 to hit, 5,6 in cover. I think I managed five hits all game! Zach just pummeled me! With all but two of the kills coming from the infantry, the Tiger never really finding its mark.

Good fun though. He enjoyed it. After the game he spent ten minutes driving the Tiger over the bodies of the Russians…