Life and work have yet again impacted on my gaming activities. Not that that has stopped me buying stuff!

Hopefully the next couple of weeks will see a resumption of activity as this weekend sees the long planned WD3 Scotland game wherein a subset of the Ayton crowd are descending on Aberfeldy for a continuation of the Byzarbian adventures as we head south into the Dark Continent! No details yet but it will be fun!

I had hoped to paint up at least another full unit for the game but things have just been too busy. All I managed to do was complete the extra dismounted dragoons I needed to bring them up to full strength. The half squadron I already had have done sterling service throughout the Ayton games and did valiant service in last Christmas’s Byzarbian Interlude where they held the river ford against the pirate hordes!

The figures are RSM. My standard squadron strength is 12 figures so I have the extra I need, plus the mounted versions plus a selection if Hinchliffe dismounted. It would have been nice to do the lot but at least I’ve made a start. Annoyingly, I forgot to black edge the bases before taking the pictures! 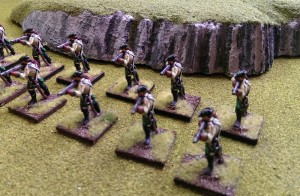 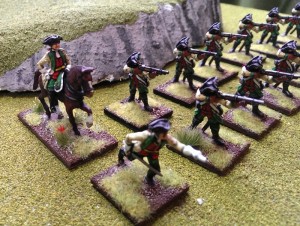 The mounted version of the officer has a nice flowery base. The idea for this came from Ian Willey over at The Blog With No Name. Ian has an excellent and active blog with some great content and recently highlighted a little discovery of flocking powder at his local The Works shop. He’s used it for some 6mm bases but I figured it would work on any scale. Just take a tuft, dip the upper tips of the tuft in PVA and dip that in the coloured flock. I tried adding some watered PVA over the top on a couple but that got a bit messy and I don’t think it needs it.

I have plans for some rather pretty basing in the near future!

Next up are some Holger Eriksson musketeers and I have the great master plan almost done for my ImagiNation forces. I’ve also got a review of Henry Hyde’s Wargaming Compendium and some thoughts on the recent passing of Donald Featherstone.