Today saw my first game of Cold War Commander at the Contemptible Little Wargames Club in North Shields. I’ve been preparing my troops for this for some time and have had stellar support from the chaps on the CWC Forums. There were three games in progress: a British v. Warsaw Pact, a French (Ian Logan) v. East German and my own Russians v. Stuart Climpson’s West Germans.

I’d prepared a 5000pt list but had misread the rules and assumed that no artillery/air support assets for an Encounter Game meant none of the above, so apart from three 122mm 2S1s to be used onboard I had no artillery and no aircraft or AA. Stuart let me jiggle my list a little and I ended up with:

Which I’ve just realised comes to 5005! Sorry Stuart but I was rushing! 🙂

Anyway, this gave me a reasonable force to combat the Leopard 1A5s, Leopard 2s, Gepards, Marders and Phantom air support with some 120mm mortars and 175mm SPGs providing offboard support. On advice I decided to pull my 122mms offboard and call them in via the Recce units.

So the battleground was set:

As I had two T-72 battalions and a Mech Rifle battalion my plan was to push both tank units down the flanks and use the BMPs to get the infantry in the town and hold and then turn the BMPs to us their ATGWs against any armour. So deployment was as follows:

Stuart had placed the 1A5s behind the ridge on my left, with support, the Leopard 2s between the road and large woods and a force of Gepards and Marders on my right. The infantry, CO and engineers prepared to move towards the town:

I chose to move first and advanced rapidly on both left and right flanks, with the left flank advancing two companies, while a third provided overwatch on the small hill. The BMPs rushed to the edge of the town and prepared to deploy.

The Recce unit on my left provided support to the HQ on that flank:

While on my right I was able to pick off a Gepard as the Germans rushed to occupy the woods:

And the T-72s sent two companies to sweep round while a third prepared to cover the advance of the Leopard 2s.

The greatest success for the Russians came on their left as the quality of both crews and armour in the T-72 battalion proved more than a match for the five Leopard 1A5s facing them as they were continually suppressed and gradually took hit after hit:

A command failure on my right (and threat of air support) caused pause to the T-72s and allowed the West Germans to occupy the woods, but they refused to open fire preferring to skulk on the edge of the woods…

A command failure by the central West German troops caused them to pull back from the advance of the glorious Soviet conscripts as they deployed ready to advance through the town.

Meanwhile on the left the T-72s started to whittle down the cautious 1A5s:

However, the Soviet troops suffered a minor setback as the cowardly Germans dropped artillery on them as they still milled around their BMPs causing heavy casualties. But the remainder sought revenge as they pushed on with the advance: 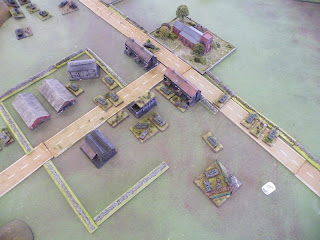 Finally, on the left, superior Russian gunnery had reduced the Leopards on the hill to a solitary unit, cowering and afraid to fire for fear of the consquences!

Overall, things were going well for the Soviets and the reports in Moscows papers would reflect well on the troops as they followed in the footsteps of their fathers and grandfathers! On the right the air support and Leopard 2s began to slow the Russian advance as they resisted the temptation to close with the anti-tank assets in the woods. However, apart from a lone recce unit, the town was now firmly in Soviet hands:

But support was at hand, despite heavy shelling by the Germans, the BMPs and remaining infantry moved to threaten the Leopard 2s:

As the remaining BMP-2s pushed into the town:

On the left the T-72s finally destroyed the last Leopard and began to take shots at the Gepards and Marders that had failed to advance on the town, while BMP-2s advanced to the edge of the town and began to make their presence known:

Things now began to look grim for the Germans as memories of 1945 could not help but come to mind. Their air support, although initally effective, flew one mission too many and was sent crashing to the ground as the ZSU-23-4 finally found its mark! On the left the T-72s prepare to advance:

While on the right the T-72s, having suffered losses to the Leopard 2s, finally pushed in close to the forces in the woods and with great leadership began to take out vehicle after vehicle. In the town and on the left the Germans pulled back behind the hill and awaited the inevitable onslaught that would seal their fate. And so, with the end close, the Germans conceded and the Soviet advance through Germany was to continue unchecked!

Conclusion
This was a great, fun game and although my first outing with the rules, things were finally coming together towards the end. I had one double 1 enabling me to push the attack on my right and the Brigade propaganda officer forbids me to mention the blunder on the left that saw friendly fire bring pause to the great advance! My artillery was little affective but did get some suppression on the Leopard 2s which helped the survival of the right flank T-72s.

The plastering my newly dismounted infantry got from artillery shows I needed to spread out more, or at least make some effort to drive off the recce and observers causing the problems.

I have to admit, I was lucky with some of my saves and Stuart REALLY unlucky (on several occasions) with his! I think I need to think a little more on force composition and how to handle the command side. Oh..and more artillery…offboard!

I look forward to my next game.

Other News
There were two other games of CWC going on. A Warsaw Pact v. British game:

And Ian had brought along his French to face Slobodan’s East Germans:

Ian lost his game, the French proving no match for the T-72s of East Germany. The railway and buildings are from Ian’s excellent collection of Timecast buildings. Really lovely stuff! I wish I had the money to buy them!
There was also a 28mm Blackpowder Napoleonic game:

And a 28mm ACW game which I totally failed to take a picture of! Apologies…

I also met up with Lawrence from the Tyneside Wargames Club and acquired a load of Belgians to add to my forces. There are still quite a few Russians left to base up (enough for another four Rifle battalions, 2 T-62 battalions and a good few odds and ends!) and I have a good start on some Belgians which the new acquisitions will seriously bolster! I’m a little uncertain how they will perform under the rules, given the performance of the French but I can maybe use them with a little US support!

All in all a good day. I’ll not get a game in again for a few weeks but will hopefully see all the guys at Border Reiver at the Arena next month.