Just over two weeks since last post… work has been busy, kids tiring etc. Although I’ve managed to get a few things done progress has been slow. Main thing has been preparation for a first outing with Cold War Commander at the Contemptible Little Wargames Club in North Shields that is scheduled for next Sunday (22nd). Looks like there will be 6-8 people involved with a variety of armies and maybe a large game and a couple of smaller ones. Would be interesting to try and tie them together in some way – maybe have one of the smaller ones as a breakthrough game with successful units appearing on the flanks of the big game? Anyway, actual details will be decided on the day and both myself and Ian are really looking forward to it. Ian will be bringing his US and French forces down as well as his Timecast buildings.

I’ve been looking at what to include in my Soviet forces. I published a list of what I have over on the CWC Forums here and got the usual excellent comment and advice.
The basic list was:

Along with an HQ:

This includes my first attempt at basing up some aircraft done with a 40x40mm MDF base with a piece of paper clip lathered in glue and held in place by a 2p and 1p piece. A similar piece of paper clip is drilled in the bottom of the model and then I managed to get some hollow brass rod so that I can swap aircraft between bases and vary the height. 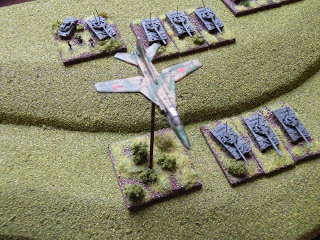 The only issue is that the paper clip is a snug fit in the rod and when I snip that to length it compressed the end and makes it hard to reshape and take the clip. May look for an alternative…

I also needed some anti-aircraft support so went for a couple of ZSU23-4s: 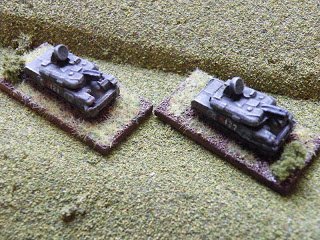 And finally I needed a couple of recce units: 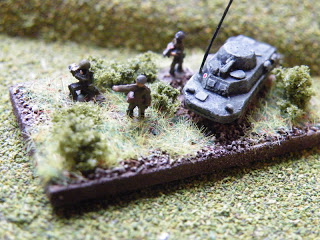 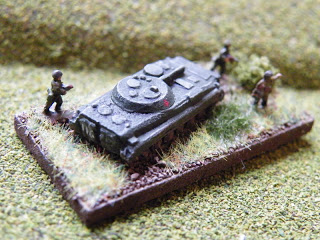 I’ve decided to keep most of my vehicles on the same size base so if I want to use recce units as ordinary units there’s no issue and I’ve just ID’d them by adding a few infantry figures.

I’ve got a few more things to add – mainly some Infantry Support Weapons and engineers for which I have an MT-LB arriving soon. I also have a couple of platoons of T-80s coming. Partly to look at the Scotia models and partly to add a little oomph to the battle group. Not sure I’ll get them painted and based by next Sunday though!

Heroics and Ros Support Weapons
I’m going to show my ignorance a little here. I’ve got several packs of the Warsaw Pact Support Weapons but I’m not 100% clear on what all the models are. So if anyone can ID these figures/weapons I’d really appreciate it!

More artillery vicar?
And talking to Ian and reading other threads on the forums I think I need more artillery but I’m not sure on what can legitimately be added? Again, any advice appreciate. I think I may have to pick up the MicroMark army lists to set me right!

So there we are. Aiming to get a few more done for next week and then do some US infantry to go with the battlegroup I bought a couple of months back so I can at least try some solo game. And then on to the Belgians!

Full game report will hopefully follow next weekends game so see you then!