Today I finally managed my first games of Impetus. Stephen Davison was back in town for the weekend so I managed to secure a pass and we agree to play a couple of games of Impetus. I was going to bring down my Mid-Republican Romans, and Stephen his Carthaginians. The plan was to have a 300pt game to get me in to the swing of things, then a 500pt as the main event. In the end the first game took a little longer than planned (I’m a slow learner!) so the second ended up being 300pt as well – although I did tweak my list. So, on to the action:

At 300pts it doesn’t leave a lot of choice once you’ve paid for the two legions and the cavalry so I basically just added some Numidians to give me the possibility of covering both flanks.

We rolled for attacker/defender and as defender I planted assorted woods and hills on each flank so even with removing two there would still be cover. Stephen opted to clear his right flank of woods just leaving a large hill. I anchored my legions on the right flank woods but had spread them out a little too much. I also initially stuck to the traditional three ranks. Basic setup is shown here with my other CM and CL off to the left. 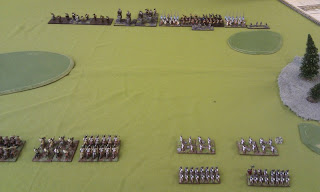 The plan was to try and force the left flank with my cavalry and Numidians and hope that my legions survived contact with this lot! 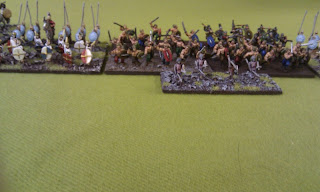 So the cavalry peeled off to the left to attack his Numidians and try and steer clear of the elephants. 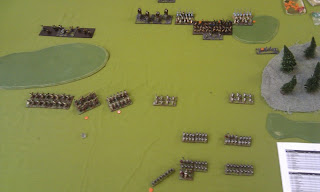 In this game, and especially so in the next, I had appalling rolls for my Discipline Tests pretty well ending up disordered whenever I tried a double move! 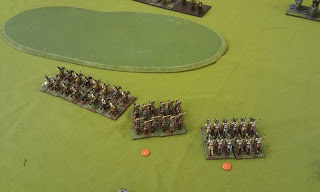 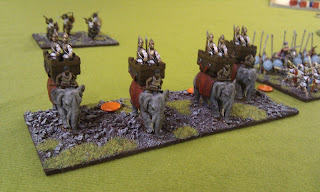 However, on my left I soon discovered how hard it is for cavalry(CM) to pin down light horse(CL)! 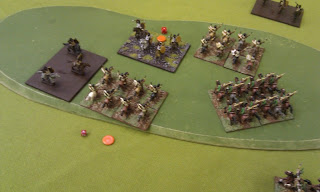 Having moved my cavalry to the left this opened a gap in my lines which I partially plugged with velites but also started moving triarii over to cover. 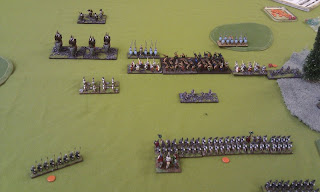 Meanwhile on the left my Numidians had fallen foul of his and died to a man and his Numidians started to sun circles around my cavalry who had had to keep moving left to avoid the elephants. 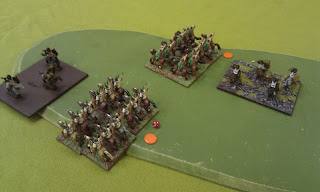 On my right, I had moved a unit of principes up to lengthen my line. My other velites had tried to engage his Numidian skirmishers and had failed miserably! And eventually the Gallic rollercoaster ploughed in to my lines! The right hand unit wiped out a unit of hastati but I was luckier with the other unit as it contacted my principes with the attached General and I was able to push them back and then pursue and kill them. 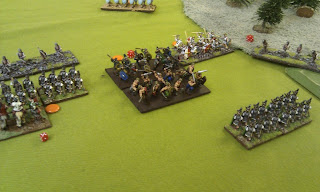 Another unit of hastati fell to the combined efforts of the Gauls and some Spaniards and depressingly, both my cavalry units fell to his Numidians. This pushed me over the 50% breakpoint and so my army crumbled. 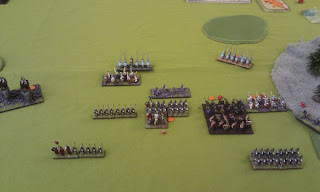 Although I didn’t get any pics at the time, my triarii actually managed to fend off the elephants – which were rather nice figures anyway! 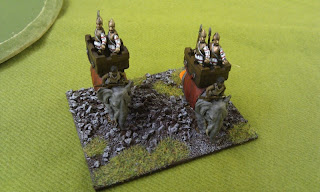 So there ended the first game. I’ll make my comments re rules etc. after the second game.

Impetus Game 2
For this we decided to stick to 300pts but I dropped a unit of Numidians, upgraded my velites and added a unit of Balaeric Slingers. Again I got the defence so threw a load of woods and hills down to crowd the flanks. This time however he left most on. This time my mounted were to my right and I used the triarii to lengthen my line. This left my legions facing elephants backed up by Gauls… 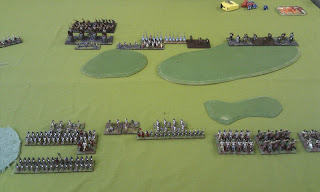 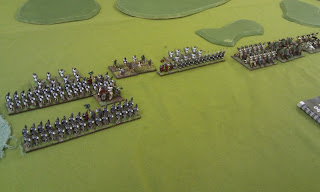 I decided on a bold approach and launched everything forward on double moves. Again I had a lot of disorder resulting but not too bad. I figured if I could get stuck in quick I might stand a chance of holding the cavalry flank long enough to do damage before the Numidians flanked me. 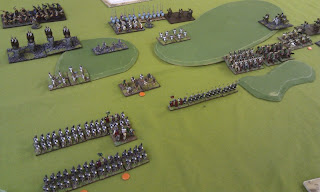 Things didn’t go well for my Numidians who got disordered and flanked. 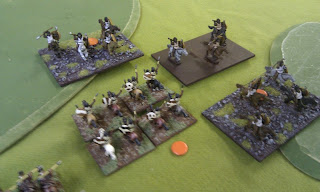 I did manage to bring up the Roman cavalry to kill one unit of Numidians but it was not to be long before mine died. 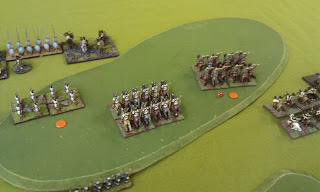 Meanwhile, the legion had pushed forward with the velites trying to attack the elephants. Although they got pushed back through the legions they were able to disorder one units and it was this that faced the hastati with my General. 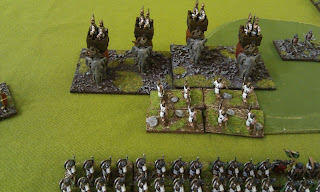 Which although I took heavy casualties managed to kill the elephants. This last melee went on for a good few turns as the Gauls started to advance. I did manage to swap out my damaged hastati with fresh principes before the Gauls hit though. 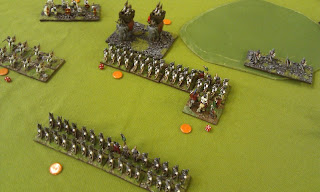 Back on my right the allied cavalry threw themselves repeatedly at the Numidians to their front. continually pushing them back, leaving the other two units to move behind my flank. 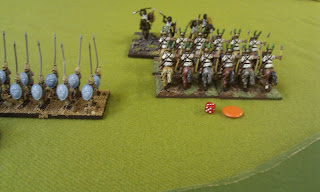 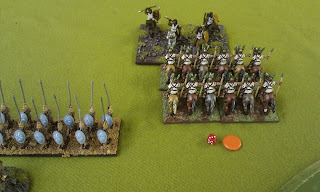 And the melee continued with the elephants as we were both on one dice! 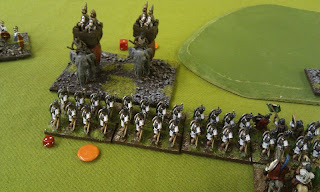 Eventually my velites were dispersed by Spanish who in turn fell to the solidly advancing triarii who eventually clashed with the veteran Carthaginian spearmen and their General! 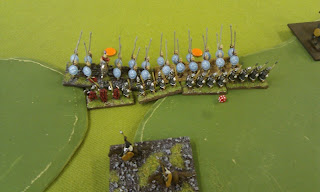 The next few turns were critical on the left as the hastati fell as the first units of Gauls came in, saving the elephants! 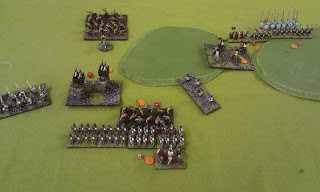 However, the fresh principes fell to the Gauls but did enough damage for the follow up unit and General to kill them! 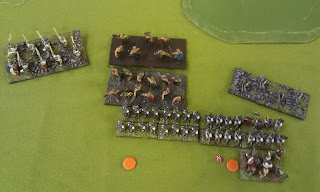 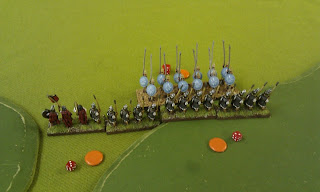 As the last unit of Gauls approached it was all too late. The elephants were finally killed, and with the loss of the last unit of spearmen the Carthaginians had had enough and fled the field! 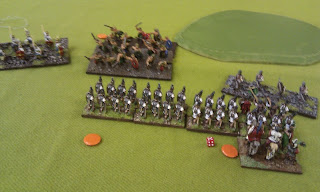 It was a sort of mini 2nd Punic War. The Romans, inexperienced in war (my first game!) fell to Punic perfidy! Their cavalry being particularly inept! Lessons learned, they returned to the field in aggressive mode and were triumphant! The legions have to get in fast before the flanks go. Stephan acknowledged that I had horrendous Discipline rolls in this game and that without those I would have contacted quicker and likely triumphed quicker! Both were fun games and it was, as usual, a pleasure to play Stephan.


Thoughts on the rules
The first game took a little getting used to, both for the mechanisms and how the game flows. At first it seems a little weird following one unit to conclusion before moving to the next. It does however give a good ebb and flow to the game and things can turn around quite quickly.


I found my cavalry VERY vulnerable to the Numidians. I couldn’t catch them, they kept harassing me with fire and eventually will kill you. I did better in the second game but I still think that ‘mediums’ are a little too fragile to ‘lights’.


I also found a few instances where I expected my skirmishers to be able to fire on incoming troops only to find they couldn’t. This was less problematic and I think is just a matter of figuring how to handle the troop types.


The other issue is the handling of the Roman three rank system. There is currently some discussion about this on the Impetus forums/mailing lists and I think something does need doing. The problem is that of balance and reflecting the real tactics. If you make the Romans too flexible then they become too powerful. Make it too easy to swap lines and they become to powerful. Currently you have to not be in contact, within 10MU and both pass Discipline tests. This can make it hard, especially as once in melee you have no chance to pull back and exchange. It’s been suggested that they be treated as Large Units with the principes the second rank. This allows the auto-support (possibly too much so) but then stops you deploying the second rank elsewhere. If you make it easier to exchange, especially when not in contact, or with penalty when in melee, then maybe you would get the Romans using proper tactics. At the moment there is no real incentive to do so as it’s likely your army will be dead by the time your third rank is required!


There also seems to be a little issue with pila. I was surprised to find that my lovely tough legions, having taken a single hit from skirmishers, were unable to use their pila on the incoming Gauls! This seemed wrong. I think they should get to use them in first melee, regardless.


Anyway, I can’t really comment more until I’ve played a few more games. I think with a larger force (and four legions) and more allied units, the Romans would work better. I’d quite like to try some solo games to see how things go. And I’m really looking forward to Extra Impetus 4!

Overall, I like the rules. Want to try them again. I don’t think I can face re-basing to suit but I will definitely make up some sabots to make the movement quicker. I did like the look of the big bases. It’s just that I’ve done a lot of re-basing recently for DBMM/FoG and can’t quite face re-doing any at the moment. If I was a regular tournament player then yes, I’d consider it, but given how many games I play, there’s a good chance my preferred rule choice could change before my next game!

9 thoughts on “Gaining a little Impetus…”