And the 20mm stuff progresses! Wanted to get these finished before the York show on Sunday coming. The main painting has been done for a few days but I needed to base and do the flags. I’m planning on putting together a flag tutorial soon as I’ve finally knocked together a template for them.

So here we have 1st Altefritzenburg Regiment, the first of three to form a brigade for the upcoming ShedCon game. They are part of my ImagiNation forces of the city state that the Savage Swans fight for. 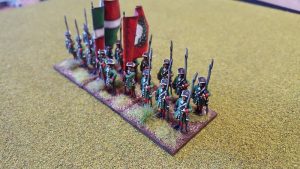 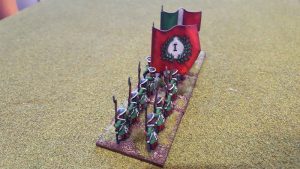