In the Summer of 1986 the tensions between East and West increased as the technological advances in the West posed a threat to the previously ‘invincible’ Soviet forces in Europe such that the constant threat of a Soviet wave crashing through Europe with little resistance became less and less of a reality. Powerful influences within the Soviet Military pushed harder and harder for a ‘first strike’ while there was still chance for the great Soviet military machine to roll forward, unstoppable, like the great Red Army of the last war.

As the customary Summer exercises started a plan was hatched to use these as a launchpad for a real offensive. Although NATO forces would be on heightened alert as usual during this time they would not expect the attack, and the element of surprise would allow the breakthrough needed and keep NATO on the defensive as rear echelon forces, not part of the exercises, were rushed forward to the offensive.

The key forces involved, two Soviet armies and and East German force would face off against British, West German and American forces. As the Soviet exercies suddenly became a real threat as troops rushed across the border, NATO forces rushed to meet them but with no time to prepare the defences they would need to face the overwhelming odds. At three key towns, the Soviets pushed along major roads as three armies prepared to meet them and hold them as long as possible.

4th Combined Arms Army – Commander Petya Sergetov
Report to Military High Command
6th June 1986
The 4th CAA was tasked with driving a West German force from the town and surrounding countryside and force a breakthrough to threaten the flanks of the nearby American and British forces. Two tank battalions, two mechanised rifle battalions, a detachment from a motorised rifle battalion, regimental and division artillery assets and anti-aircraft support were designated to lead the attack. The West German forces had deployed their infantry and anti-tank weapons in the town and woods while the armour was still hidden behind the southern woods. 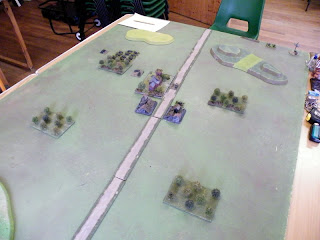 As the advance elements of the 4th CAA entered the area the scheduled artillery attacks began to land on the woods and town and on the hills to the West.

Intelligence reports had indicated the Germans would deploy on the hills and consequently the heaviest batteries were concentrated there, to little effect. The intelligence officers responsible have been ‘reassigned’.
As the bombardment continued the first elements moved forwards. T-72s were to push forward on the southern flanks with BMPs and supporting armour heading for the woods. Anti-aircraft forces deployed on the southern hill.

Two more combined T-72 and BMP units were to push through the center but one units failed to arrive on time forcing the other to deploy on the northern hill to await its support. The northern flank was left to two companies of BTRs and a company of T-72s.

Although reconnaissance units had pushed forward down the road and into both woods they did not provide adequate information for the advancing units causing them to falter after their first advance. Although the southern MRR units advanced rapidly, the main armour force on their flanks was not aggressive enough.

Soon the West German forces began to react and the lack of aggression from the southern armour commander saw them subjected to intensive enemy fire, suppressing them before they were able to come in to effective range and engage. Finally the second MRR battalion caught up and rush down the road to engage the enemy occupying the town.

Under pressure from Command the armour and BMPs pushed forward on the Southern flank but again were faced with heavy fire as the German Leopards finally deployed close to the woods to face them. The continuing scheduled artillery bombardment had some effect in the town and one battalion of 152mm was reassigned to attack the German armour but the hasty change of target resulted on the bombardment landing too far south to have any effect.
Meanwhile, on the northern flank the T-72 company pushed forward to distract the ATGW armed infantry in the woods and town to allow the BTRs to advance.

Things did not go well on the southern flank. Faced with accurate and persistent fire from the German Leopards both the T-72s and BMPs started to take casualties and the attack started to falter. In an attempt to address this I moved my command forward to the front line but was almost overrun by withdrawing tanks and saw panic in the MRR battalion as confusing orders resulted in friendly fire destroying almost a company of BMPs along with their passengers. Not a glorious way to die for the Motherland.

As I took control of the center the situation started to stabilise. As the T-72s came withing effective range the superior gunnery skills of the Soviet tanker began to tell as Leopard after Leopard was destroyed.

However, the German infantry in the town, armed with Carl Gustavs were taking their toll of the central MRR battalion. A company of T-72s were lost and several companies of BMPs were picked off at long range, both by infantry and by the remaining Leopards. The German flank was weakening as their armour fell, but continued accurate gunnery suppressed many of our units as German Phantoms launched several attacks on the supporting units. Our artillery, although called upon regularly, was having little effect but still the remaining Germans held on.

The Germans still held the town and woods and although close to breaking they inflicted many casualties, especially on the southern flank.

It was at this point that the Germans started to falter. Although they still held the field they were on the verge of breaking. There was little left of the German armour but the infantry in the towns would still take time to force out.

Although the 4th CAA was staggering under its own losses it was only a matter of time before the Germans would be forced to withdraw leaving the way open for the advance to continue.
It was only through my presence on the front line that the position stabilised. Those commanders who faltered in the service of the Motherland have been replaced and the 4th Combined Arms Army is ready for the next stage of the offensive.
Petya Sergetov, Commander
Meanwhile, on other fronts. The East Germans finally drove the Americans from the field after concentrating its armour against the Abrams and destroying several.

The other Soviet army, facing a staunch British defense was still continuing its assault.

Comments
This was only my second proper game of CWC and I found it quite difficult to put together a list. It was decided that for the opening attack the Soviets would have 8000pts vs. NATOs 4000pts. As this was a surprise attack NATO had no prepared defences although the Soviets did not know this and so came prepare with mine-rollers, engineers etc. Well the others did. I haven’t painted the models yet so didn’t bother! This was my list:
1 CO (CV9)

I organised the armour/BMPs in to:
6 x T-72
3 x T-72 + 6 x BMP-2
3 x T-72 + 6 x BMP-2
3 x T-72
4 x BTR
The AA assets were all part of one command with some supporting RPG infantry as guards. All artillery was off board. The 24 HE assets were used on turns one and two and not really effective. I think I should have gone for maybe one more turns worth and added some smoke.
The AA units were a miscalculation. I’d picked two SA-6s for their range only to find that they need LOS to the actual hit point of an air attack! This wasn’t a particularly crowded board but I couldn’t see how they just couldn’t see loads of bloody aircraft flying across the table!
I’d wanted to go for accurate TO&E but to do either a full Tank or Mech regiment left too little for the supporting arms they would have needed for a successful attack.
It was a good, fun game and shows how much I still need to learn (and paint!) for these rules! Stuart, my West German opponent, got his revenge for our last encounter and it would have been nice to play another turn or two. The Germans had hit their breakpoint and I was only five off mine so although I needed to push to get the final breakthrough I stood a good chance of breaking myself.
I look forward to the next encounter, this time with 6000v5000pts, sometime in November.